Yes it has been very wet and very windy here, but it seems to be quietening down now, I even ventured out with the camera yesterday for an hour, however the rain soon came and drove me away. On the up side – because of the bad weather – it has given me a chance to dig through and sort some of my old photos out.

First up is a photo I found from a time when I was young and single and thought the world was my Oyster. It’s a pic of  me and a band member  in a group called the Rikki Alan Trio. We were quite ahead of  our time in Wales and unusual for a rock group in as much as we all read music. This came in very handy later when we ventured up to the big city (London) to become ‘Professional’ Musicians. Anyway, that is a long story and I don’t know if this is the right place to start digging it all up in any detail, but maybe bits from time to time.  Suffice to say that this photo shows me and one of the guys – Gerry Smith – in about 1957. We are way up in the Welsh Valleys in a place called Aberaman and we are bottom of the bill which is headlined by a British Rock star named Marty Wilde.  The interesting thing about this pic is, looking at the kids who are watching us and the way they are dressed etc, you would think it was taken in the 1930’s. 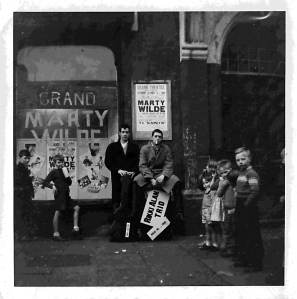 This was at a time when coal mining was still a huge industry in Wales and the biggest employer. However, today there are no mines, well maybe one or two private mines, but there are lots of bits of  bits of memorabilia around, this next pic is just one such piece. This was taken in a place called Mysycymmer (at least I think that’s how it is spelled) and it is of some of the coal trucks that were left when the mine was closed. Rather than dump them some clever person decided to make a memorial out of them.

Lastly, for this blog, is another photo of me (well it’s my blog). We started with a pic of when I was a young whipper snapper who thought he was God’s gift (soon found out that he wasn’t when he got to the city)! And, we end with a photo taken some 15 years later. Picture is me on drums, the late Peter Bocking on guitar and the late and very great Lonnie Donegan out front. This was taken in Lounge at the Riviera Hotel in Vegas where we were supporting Vic Damone. Very briefly Lonnie was known as the King of Skiffle, he was responsible for every kid in the UK buying a guitar and starting Skiffle groups. We all had a Skiffle group. Even the Beatles started as a Skiffle group, they were called the Quarrymen, but I guess my dear readers will all know that.
Whatever, to this day Lonnie is hailed as the one man who started the whole British Rock and Blues industry because, after the Skiffle groups, all the budding musicians – as they became more and more proficient – turned into rock groups. Many of the stars of today name Lonnie as the one reason for starting them off in their chosen profession including: Eric Clapton, Brian May, Elton John, Paul McCartney et al. The list is endless.  I was very fortunate when that day he walked past my drum kit in a London music store where I was demonstrating the product, and dropped his visiting card on my floor tom-tom and said, “if you ever need a gig give me a call”.  Needless to say, I called him the very next day.