I was very fortunate yesterday to have a few hours to myself. Having heard about a Gwent Wildlife Trust site nearby, I decided to investigate.  It turned out to be about a 30 minute walk from my home, and when I eventually found it, it was just one small gate tucked away in a small lay-by on a country lane.

None-the-less it was absolutely lovely. It is only about three acres in size, and it is very wild still, which is how it was intended to be.  There are a lot of wild flowers, of which I’m ashamed to say I could only identify one, but I have made a mental note to obtain a small pocket book that I can take with me to assist with identification in the future.
There were also plenty of birds, rabbits and I managed to get a quick shot of a rather large dragonfly, once again, sorry but I couldn’t identify it, but I have enclosed a photo here.  If anyone can help with the identification, please be good enough to leave a comment.
It is my intention to make another visit ASAP, I will keep you posted.

For a while in the early ’80’s I ran a music shop in Berkshire, UK. One of the nice things about working in a music shop is the interesting people that just ‘drop’ in. One person who dropped in regularly was a guy name Danny Clifford. After a while we got talking about photography, and at that time I was still a keen semi-pro. Whereas Danny had already been around the world with Bob Dylan as his tour photographer, and his office he shared with The Who.

I haven’t seen him in person for a number of years now but I did see him escorting Victoria Beckham on the recent TV programme of the Beckham’s move to the States.

His web site is well worth the visit at www.dannyclifford.com

I have been away for a while not literally you understand, but away from the opportunity to post anything here.
I have been involved with a couple of new clients who are just in the process of launching their businesses.

One will be operating an on-line business selling jewellery, and watches. The business has some really good ideas, and the products are all vintage, at least the watches are. I was amazed at the quality and condition of these watches. They are absolutely pristine. It makes one wonder if they were ever actually worn by the original owner(s).

My role for this company was just to photograph the merchandise.
The other business in a new record label, the label is run by two brothers from their base in London. Basically, one brother in responsible for the administration of the business. And the other, is mainly responsible for producing product (although they also occasionally write some stuff together).

My role here was basic business start-up advice in the first instance, which involved incorporating the company, raising finance and a photo shoot for publicity material.

Once again, I’ll post their details when everything is sorted. 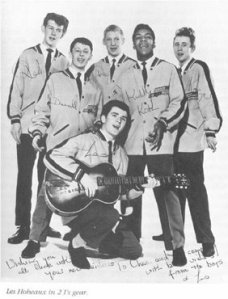 I was very pleased to receive this pic of one of the first popular skiffle groups. The leader of the band is Les Bennetts who eventually joined Lonnie Donegan, king of skiffle. I joined Lonnie on drums in 1968 and Les was in the band then. Les is, sadly no longer with us but he has left some great memories both musical and otherwise.

My thanks to June Appleby who was Les’s wife for many years in those heady crazy days of the late 50’s and early 60’s for this and many other fine pics, all of which will be published here as soon as we get the time.

More pics can be found at: www.flickr.com/photos/mganda

When I was about 20 I was living in London trying to make a living as a musician. Being a drummer I would frequent Drum City, which was the first music shop solely for drummers and set up by the legendary Musical Instrument Industry giant, Ivor Arbiter. During my visits I would regularly bump into other drummers one of which was Dave Clark. At about that time Dave told me they had just landed a residency at the Tottenham Lorcarno (I think). it was not that long after that, that they had their first hit. The rest, as they say, is history.

How sad that I have just heard, that keyboard player and the voice on all those hit records, Mike Smith has just passed away. I know that he had had a fall in Spain which had left him paralysed, and he spent a great deal of time in Stoke Manderville Hospital. But apparently, he died of Pneumonia in the USA. So sad, and our thoughts and prayers go to his wife and family. 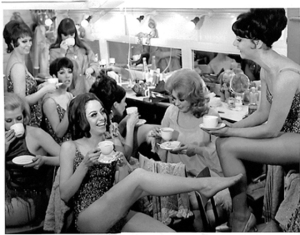 In 1968 I met and worked with a gang of dancers who worked mainly for the late Choreographer, Pam Devis. They were resident at the Palladium for a long time and supported many of the worlds greatest names in entertainment. One of the dancers-Ondrea Lloyd – I eventually married, and another, Connie Poor, became a lifelong friend to both of us and now lives in Perth Australia.

Connie has worked with just about everyone in the business at some time or other and is now, not only a great mother but grandmother to boot! She is also great source for old photos and recently sent us this picture of the girls, taken in the dressing room during the Val Doonigan Show at the Palladium, shooting a tea commercial.

Connie is in the front with her leg up on a chair back, and Ondrea is to the far left standing.

Anyone remember the Palladium Dancers, or perhaps you were one or know one, please leave a comment, it would great to make contact.

The only other names I can remember in the photo are; Chrissie Martin, Maggie Dew and Gaynor Martine. 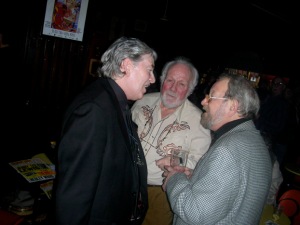 It has been a year already since the 50th anniversary of the 2’i’s Coffee Bar was held at the 100 Club in Oxford Street London.

The 2’i’s was one of the first, if not THE first coffee bar in the UK where live music could be heard. Although I was a pro musician in 1960 in London, I regret I never had the chance to actually play there. However, I was a fairly regular visitor and, learn much from just being amongst the hot and sweaty crowd listening to the likes of, Vince Taylor and have some special memories of his drummer at that time, Bobby Woodman. Drums were my instrument and I had been taught the instrument in the classical way, i.e via a professional teacher (Geoff Myers) and learnt to read music, and loved Jazz and Big Band. Imagine my feelings the first time I heard this raw wild drummer with two bass drums playing Eddie Cochran’s “C’mon Everybody”. Bobby may not have been the greatest technician in the world at that time, but I had never heard anyone play drums like that before!

In later years I got to play with a number of the solo acts from that era including; Johnnie Gentle, Dickie Pride, Lance Fortune and Keith Kelly to name but a few.

At the 2007 Anniversary I was fortunate to meet up again with, Chas MacDevitte, who I had briefly played with in 1964 and Norman Sheffield who used to own Trident Studios in London’s Soho. The photo shows, me on the left, Chas facing the camera and Norman on the right.

The first week in December is a busy one for us lot. First it’s my birthday and my grandson Josh’s on the same day, and his dad’s (my eldest Ben) on the 4th. This year for a change we all got to actually go out together for dinner, kids and all.

A good time was by one and all, and a very nice waitress was good enough to take this pic for us.

OK, I know most folk have been ‘blogging’ for a long time now, but  I have been doing other things! However, I have finally succeeded in getting a blog up and running.   How successful it will be is another question.